THE SLAVE MARKET AT ZANZIBAR. 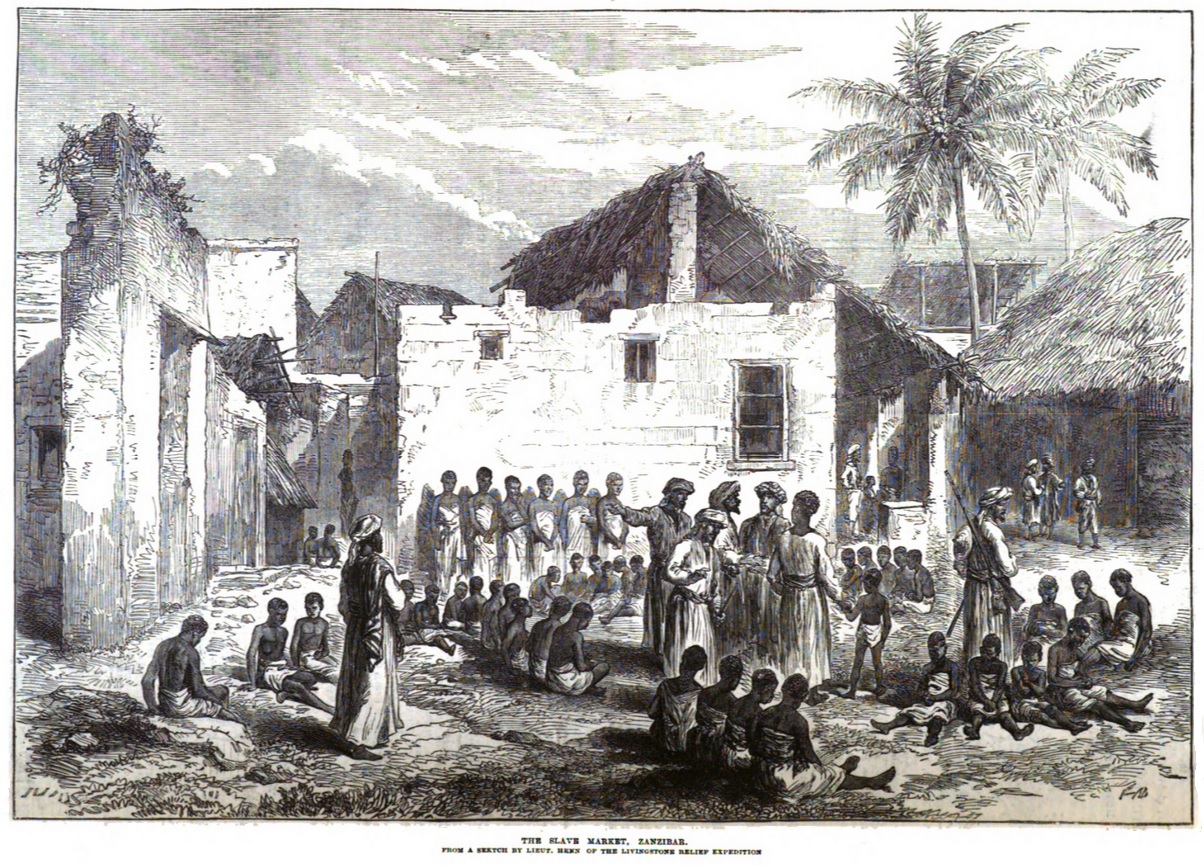 A sketch of the effects of the cyclone at Zanzibar, and a view of the British Consulate in that East African seaport town, were engraved in our last week's Paper, having been furnished by Lieutenant W.W. Henn, R.N., one of the officers of the Livingstone Search Expedition, under Lieutenant Llewellyn Dawson. Zanzibar possesses the only open slave market now existing in the world. The place, of which Lieutenant Henn sends us a sketch, is an irregular, unpaved, oblong space, fifty yards by thirty yards in extent, three of its sides consisting of palm-thatched huts, the fourth presenting stone buildings of more respectable pretensions. The sale generally takes place about four o'clock in the afternoon, and at five business may be said to be at its height. The centre of the market is occupied by the slaves, who are seated in rows on the ground. Walking about and criticising the various lots are to be seen men of every race belonging to Eastern Africa and Arabia, from the wily Arab of Oman, who means to purchase thirty or forty slaves, to the fierce Somauli who intends a small speculation of three or four only. The English stranger is looked upon here with anything but favour by these gentlemen, especially if his aspect is at all nautical; as the ship of war in harbour is only waiting for the change of the monsoon, at which time the numerous slave carrying dhows make sail for the north. She will then lie in wait for them, and capture such of those vessels as may fall in her way. Apart from the other slaves, and standing up, are to be seen the choice female specimens. It is a revolting sight to watch a lascivious Arab, wishing to add stock to his harem, handling and examining the objects of his purchase before closing a bargain. The average price of male slaves is from 15 dols. to 20 dols., but the female slaves and concubines sell at from 40 dols. to 120 dols. About six o'clock the purchasers and the purchased begin to leave the market, and by seven the place is entirely deserted. When well attended, the number of slaves and buyers here will often exceed 600. The reader who wishes for local information is referred to Captain R.F. Burton's book, "Zanzibar City, Island, and Coast," in two volumes, lately published by Messrs. Tinsley Brothers.